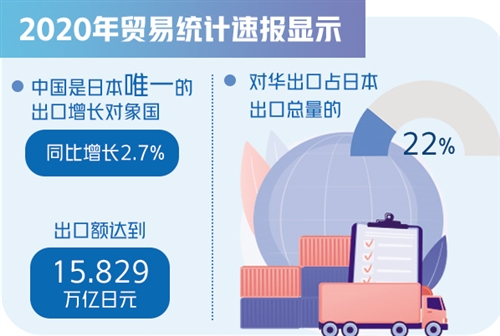 ) Su Haihe, January 21st, the Japanese finance ministry issued the 2020 trade statistics bulletin. In January 21st, Japan’s exports amounted to 68 trillion and 406 billion 600 million yen, down 11.1% from the same period last year. The export of automobiles was down by 20% and the total export volume was down by third. China is Japan’s only export growth target country, with a year-on-year growth of 2.7%, and the export volume reached 15.829 trillion yen. The exports of automobiles, spare parts and non-ferrous metals to China increased. In particular, in December 2020, the export volume to China was 1.5567 trillion yen, a year-on-year increase of 10.2%, realizing an increase in exports to China for six consecutive months. Exports to China account for 22% of Japan’s total exports, not only exceeding the proportion of 17% to 19% since 2010, but also exceeding the proportion of 18.4% to the United States. China has once again become Japan’s largest trading partner. China’s early control novel coronavirus pneumonia, rapid economic recovery and strong domestic consumption are the main reasons for the increase in exports to China, according to Japanese media analysis.

(editor in charge: He Xin)