According to the latest statistics released by Johns Hopkins University on the 24th, more than 25 million new crown cases have been diagnosed in the United States.

Analysts pointed out that COVID-19 is like a developer, completely unmasked by the chronic diseases such as inequality, fragmentation and politicization in the US medical system.

Since the outbreak of COVID-19 in the United States, ethnic minorities have become the most affected group. Statistics show that in COVID-19, the mortality rate of African Americans and aborigines is higher than that of whites.

As of the 24th, California had the largest number of new crown confirmed cases in the United States, followed by Texas, Florida, New York and Illinois.

Corbett, an African American immunologist at the National Institutes of health in the United States, once said that some hospitals would give up intubation treatment for black people first in case of insufficient ventilators.

In addition, due to the lower medical insurance coverage of the African American group, some people can not get medical services in time due to economic reasons after diagnosis, which also leads to the higher death rate of this group.

Senator Elizabeth Warren of Massachusetts says that the long term structural racism in the United States has prevented many black and brown race families from getting quality medical services, and COVID-19 has exacerbated this problem.

The United States launched a large-scale new crown vaccination in December last year, but the current vaccination progress is far less than expected. The lack of national co-ordination and unreasonable distribution of vaccines continue to cause controversy, highlighting the fragmentation of the U.S. health care system. 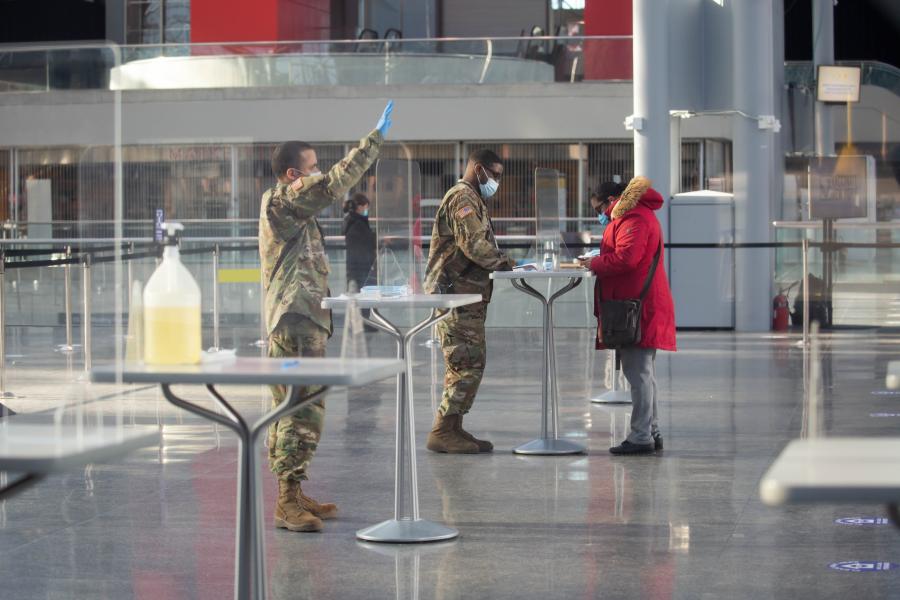 On January 23, in New York, the United States, members of the national guard received people at the new crown vaccination center at jawitz Convention and Exhibition Center. Shen Jizhong

Harvard University professor riffat Aton said that the evidence so far shows that a highly centralized, government funded, universal coverage system and a strong chain of command and control can better survive the crisis. “The overall strength of this chain is determined by the weakest link. In the United States, there is no so-called integrated health system, only a state system, and each state has different subsystems, so it is difficult to have a wise and coordinated response. “

Due to the lack of a unified national vaccine distribution plan, hundreds of different programs have been developed in the States and counties of the United States, resulting in a lot of confusion, and the shortage of medical resources also increases the difficulty of vaccine distribution. According to US media reports, in Florida, Tennessee, Texas and other places, the local medical system has been overloaded, and it is difficult to meet the demand for vaccination.

Munseff slavey, former chief consultant of the US new crown vaccine and drug research program “warp speed”, once said that the United States plans to vaccinate 20 million people by the end of December 2020. However, according to the data published on the website of the Centers for Disease Control and prevention of the United States, as of January 5 this year, only about 4.8 million doses of vaccine have been injected, which is obviously behind the original plan.

Medical expenses are too high 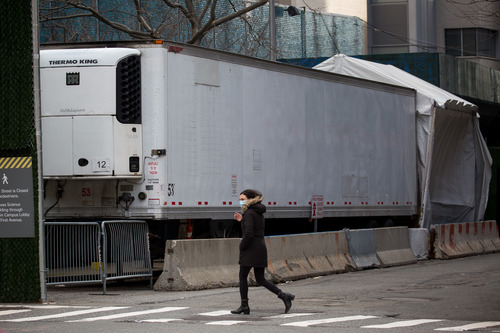 A woman walks past a refrigerator car used for temporary storage of bodies in New York, US, on January 18. Shen Jizhong

According to the data released by the organization for economic cooperation and development in July 2020, the per capita medical expenditure of the United States in 2019 is more than US $11000, which is far higher than that of other developed countries, while the per capita life expectancy of the United States ranks lower among developed countries.

German Daily Mirror website pointed out that nearly 30 million people in the United States do not have medical insurance, and more people try not to see a doctor because of high medical expenses. The website of Atlantic Monthly reported in April 2020 that after the low-income people in the United States get sick, “they usually delay seeing a doctor, not because they don’t want to recover, but because they have no money at all.”.

According to the US media, multiple factors such as the lack of US government supervision, large companies monopolizing the drug market, and strong lobbying power of commercial insurance companies have led to large medical investment and low efficiency in the United States, and the low-income groups in the United States can not get effective treatment in time.

Analysts pointed out that drastic reform is needed to change the stubborn disease of the U.S. health care system, but given that the U.S. political system allows special interest groups and large enterprises to provide political contributions, no matter which political party will not easily touch the fundamental interests of “gold owners” such as medical and insurance giants.