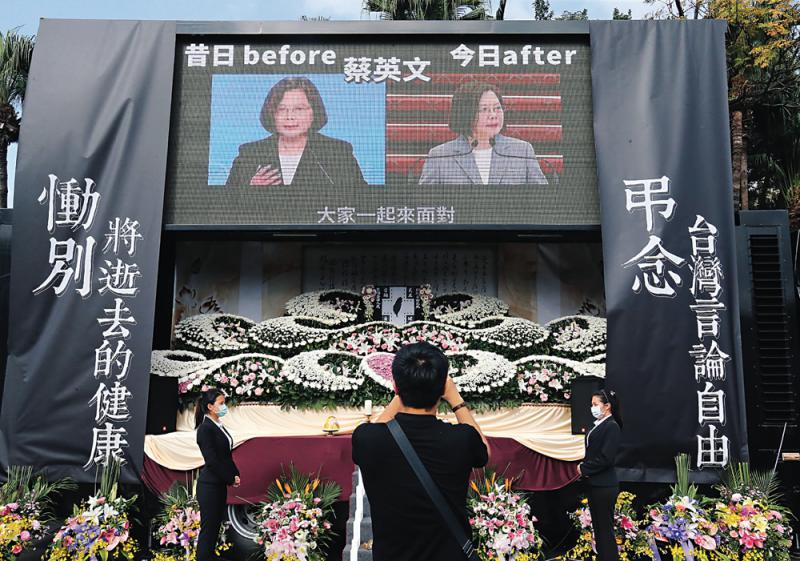 &”Support Zhongtian news” and “don’t eat American poison pig” are the posthumous letters left by a 70 year old man in Taipei before he set himself on fire a month ago, expressing his strong dissatisfaction with the DPP Cai government’s forced closure of Zhongtian news and the suppression of freedom of speech. It’s amazing. What’s the time? Does the Taiwan authorities claim that Taiwan is the “pioneer of democracy in Asia”? Why do the people in Taiwan fight for freedom of speech in such a tragic way as self Immolation? However, self Immolation is just the tip of the iceberg. Scholars were prosecuted by the police for criticizing the Tsai government’s policy of the Forbidden City, while doctors were summoned by the police for criticizing the Tsai government for forcibly opening up the import of lean meat and lean pork from the United States, and those who made unified remarks were silenced. Scholars on both sides of the Strait pointed out that the Taiwan authorities control public opinion in order to cover up their mistakes, win the election, promote “Taiwan independence” and suppress the talk about reunification.

&”If you want to add to the crime, why not? At that time, after my program was brain damaged and even turned off, I knew that Zhongtian news would not live long. &”Huang Zhixian, who used to be the host of the political commentary program” night asking for power “of Taiwan’s Zhongtian news station, told Ta Kung Pao that the DPP authorities suppressed her program and then closed Zhongtian news station, apparently in order to block the voice of criticizing the government, eliminate dissidents and maintain political power. Tsai ing Wen’s government has turned Taiwan into a “one word” country. On the surface, it claims to support “freedom of speech”. In fact, it only protects the freedom of speech of “Taiwan independence”, and it has to suppress the speech of reunification. The so-called “freedom of speech” is a tool for the DPP to seize power.

When people make statements that are not conducive to the ruling of the DPP authorities and against “Taiwan independence”, it is not expected that they will be accused of crimes and bullying. Su Hongda, a professor of Taiwan University, was questioned by the police for publishing a short film on Facebook criticizing the Taipei Palace Museum policy of CAI authorities. He was charged with rumor making. Although the court ruled that he was not guilty, the whole process from being interrogated in the police station to being tried in court was enough to produce a deterrent effect. Su Hongda is a scholar from a famous university. After this case, he felt that “blood is dripping from his heart”, not to mention the grassroots people.

The case of suhongda is just the tip of the iceberg that the DPP authorities have clamped down on freedom of speech. Su Weishuo, a Kaohsiung doctor who has spared no effort in health food safety, has been repeatedly attacked by the Ministry of health and welfare because he has proved that American lean meat is harmful to human health; He was also asked to appear at the police station at 10 p.m. on Christmas Eve. His identity as a doctor was also questioned. Although the police finally stopped the interview because public opinion criticized the Tsai government for bullying Su Weishuo, they could not hide the DPP authorities’ bad intention of using public power to stop the public.

Cai’s government controlled speech not only to consolidate the regime, but also to promote “Taiwan independence” and create an “Anti China” atmosphere. The mainland story book “waiting for Dad to go home” tells a warm and touching story of a doctor’s father who devoted himself to the front line of anti epidemic during the epidemic period. It is inconceivable that such a children’s book full of positive energy was targeted by the DPP authorities, becoming the first banned book to be removed from the shelves in more than 30 years since the lifting of martial law in Taiwan. This approach is the same as that of the DPP authorities who shut down Zhongtian news station, which is different from their own political position, by administrative means on the pretext of charges.

The DPP authorities are tightening their control over speech. On the one hand, they suppress dissidents with the crime of spreading rumors; on the other hand, they feed the Internet forces and manipulate the direction of public opinion. People from all walks of life on the island can feel the fear of DPP leaders in suppressing freedom of speech in order to eliminate different voices. Wang Feng, President of China times, also told Ta Kung Pao that in a so-called “democratic and free” society, the rulers should suppress the freedom of speech of the general public and block the media, which is a very serious and abominable act. Under the banner of “democracy and freedom”, the DPP is actually a feudal, backward and centralized political organization. Taiwan’s once proud liberal democracy has become hollow.

One of the means for the DPP authorities to control public opinion is to cultivate a net army. Through these “cyber thugs”, they bully and spread rumors on the Internet to create the wind. In Taiwan, the Internet army, also known as “1450” comes from the DPP government’s plan to allocate NT $14.5 million in 2016 to employ small editors to “correct” false information on the Internet, and is suspected of taking taxpayers’ money to support the Internet army. From then on, & lt; 1450 & gt; became the code name of the DPP network army.

Over the years, the DPP authorities have been familiar with using the Internet to play politics and restrict the freedom of public opinion. For example, before the election of Taiwan’s leader in 2018, Facebook set up a special office, ostensibly to ensure a fair election, but actually disbanded hundreds of fans who were unfriendly to Tsai ing Wen. During the epidemic period, the DPP authorities vigorously promoted “mask diplomacy” and “seeking independence through epidemic”. Tsai ing Wen’s Twitter, which has more than 850000 fans, is an important channel. Among them, the DPP “Cyber Army” also wantonly attacked international celebrities such as who director general Tam Desai and Singapore Prime Minister’s wife he Jing.

Lin Dingpeng, President of the North Court of Sun Wen School of the Kuomintang, told Ta Kung Pao that the DPP was very clear about the importance of propaganda machinery, so after taking power, it wantonly used government resources to make budget, openly raised more Internet troops, suppressed dissidents, and created a favorable public opinion atmosphere for itself. 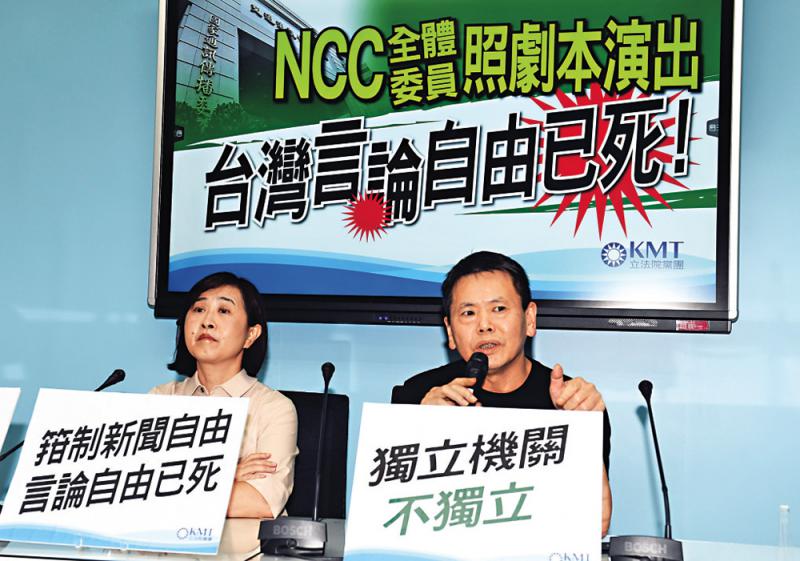 Qiu Yi, a professor at the China Culture University on the island, told Ta Kung Pao that the Tsai ing Wen government has five purposes in regulating freedom of speech. First of all, Tsai ing Wen wants to hypnotize the people of Taiwan, especially the young people in Taiwan, so that they have a strong sense of “hatred against China and Anti China”. Therefore, she needs to control her speech to vilify and demonize the mainland, so that the young people in Taiwan can cooperate with her “Taiwan independence” line. Second, Tsai ing Wen is guided by the “Taiwan centrism” and “de Sinicization”. In order to hide people’s eyes and ears, she must control public opinion and prevent the Taiwan people from knowing the truth.

Qiu Yi said that third, Tsai ing Wen learned from the lessons and experience of the DPP Chen Shui Bian government’s failure to control public opinion in those years, and believed that controlling the Internet, media and public opinion was conducive to the election. Fourth, if Tsai ing Wen is to cause “social death” to those who threaten her, she must master the freedom of speech and control the media. Fifth, in order to be a “God maker” and a “democratically elected dictator”, Tsai ing Wen needs to stabilize the political power and control the factions within the party. She also needs to control her speech, so that her “Taiwan independence” line can become the mainstream of society and Taiwan can become a “one talk shop”;.

Wang Yong, vice chairman of the China unification Union on the island, pointed out that in the DPP authorities, & lt; freedom of speech & gt;, is to support & lt; freedom of Taiwan independence & gt;, is to stir up cross-strait hatred and slander the freedom to discredit the mainland. Under the rule of the Democratic Progressive Party, green totalitarianism is becoming more and more obvious. Through a series of seemingly democratic means, they are suppressing multiple voices and driving the island’s freedom of speech crazy. 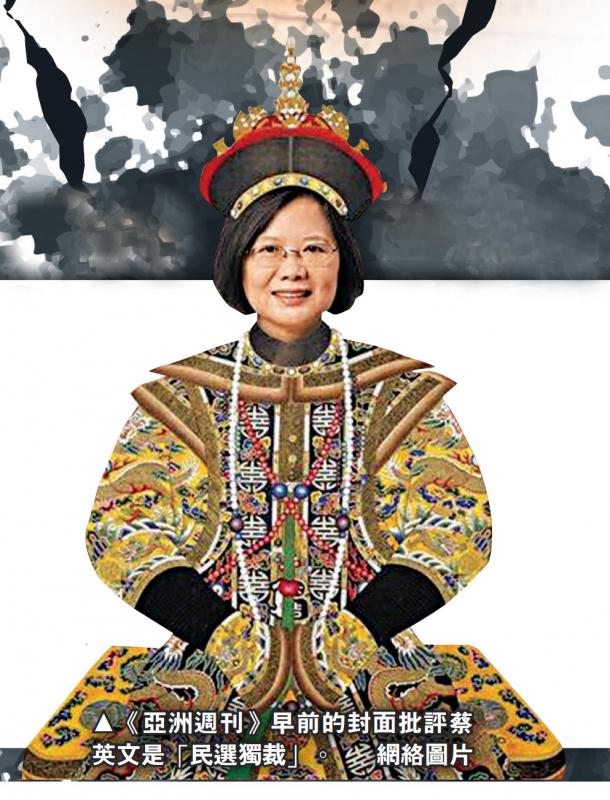 Liberal writer Los Angeles gene published articles criticizing the CAI government and the DPP, and his Facebook was permanently banned.

Hu Youwei, director of the Journalism Department of Taiwan Cultural University, has a common saying that he tends to support Han Guoyu, the Kuomintang. His Facebook was closed for a time, and the outside world questioned that he was retaliated by the DPP authorities.

“Asking for the right to fight at night” has been suspended

Taiwan host Huang Zhixian’s program was shut down by the Taiwan authorities for his remarks in support of cross-strait reunification.

The Legislative Yuan, headed by DPP legislators, has amended the national security law to bring cyberspace under control.

Last year, the Taiwan authorities revised seven laws and regulations in the name of cracking down on “false news”. In fact, they defined news that is not conducive to the DPP as “false news”;.

Peng Wenzheng, the host of “politics, economy and people’s TV”, criticized Tsai ing Wen’s government and the program was suspended.

The Party member criticized CAI and was expelled

According to media reports, when Tsai ing Wen was chairman of the Democratic Progressive Party, she personally called the media and asked to stop a column.

The government was sued

A children’s painting book published in mainland China was banned from publishing in Taiwan by the Tsai government because it tells the story of anti epidemic in mainland China and has the words “come on, Wuhan”.

Su Weishuo, a Kaohsiung doctor, was censored by the Taiwan authorities and summoned by the police for proving that American lean pork is harmful to human health.