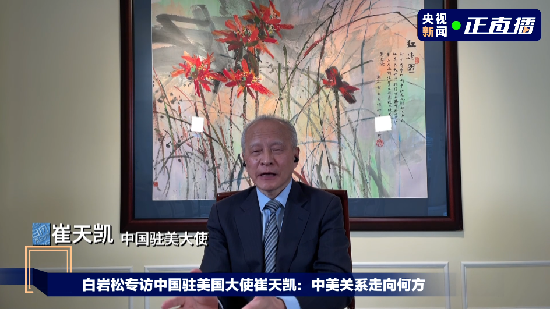 Q: A White House spokesman said Biden will face China with “patience”. What do you think?

In this regard, Cui Tiankai said that patience is of course a good thing. He hoped that the US side could review and reflect on its China policy in recent years, find out the crux of the problem, and indeed adopt a positive, constructive, forward-looking and realistic China policy.

Cui Tiankai believes that patience alone is not enough, but also rationality and sincerity. &”The White House spokesman basically defines Sino US relations as strategic competitive relations, and some views on China’s domestic and foreign policies are not so accurate.” Cui Tiankai hopes that the US side can patiently and objectively understand China, the world today, and Sino US relations.

Q: No matter who is the president of the United States, Sino US relations will not become very good?

Cui Tiankai believes that if we want to develop a healthy and stable relationship between China and the United States, we should clearly answer a fundamental question: can and should two countries with very different history, culture and social systems live in peace, focus on cooperation and control differences, so as to truly benefit the two peoples and the international community; For the United States, it is a fundamental question whether it can accept the development of China, which is very different from it, and whether it can respect the right of the Chinese people to pursue a better life.

Q: Can you still study in the United States?

Cui Tiankai believes that students and parents should weigh and choose where to study according to their needs and objective conditions. The level of science and technology and education in the United States is still leading in the world, and there are still many places in the United States to learn from.

Cui Tiankai believes that the United States will become one of the destinations for studying abroad. Our attitude should be neither blind worship nor blind rejection. No matter where we go to study, the purpose is to be better ourselves, not to become others. ”

Cui Tiankai said that the United States should show its good intentions. Now that the Biden administration has just taken office, the two sides have not yet begun to discuss this issue.

Q: Will the Sino US trade war continue?

Cui Tiankai said that the Chinese side has always opposed the so-called trade war. If someone has to impose a trade war on us, we are not afraid of it, and we can accompany him to the end. ”

Business people in the United States generally hope that the relations between the two countries will return to the right track as soon as possible, so as to provide a normal and favorable business environment for enterprises of both sides. China has been actively making efforts for the normal economic and trade relations between the two sides. Despite the tariff war and trade war imposed on us by the United States, and despite the impact of the epidemic, our reform and opening up has never stopped, and our business environment is constantly improving, which is also a matter of public opinion in the American business community. ”

Q: Is Sino US relations at the lowest ebb? Is it possible to be lower?

In this regard, Cui Tiankai believes that it all depends on what kind of policy choices the two sides make. If one side has to make the wrong choice and go to confrontation, the situation will be worse than it is now, but we should work hard for the better. ”

The change of Sino US relations is absolute, and the unchanging is relative. The key lies in which direction to change. It depends on whether the two sides can go in opposite directions, whether they can reach a certain consensus on the strategic framework of Sino US relations, and what kind of policies the new US government will adopt.

Cui Tiankai said that from a long-term historical point of view, there is only “cooperation” between China and the United States, which is the only right choice. As long as both sides can make such a choice, unswervingly overcome difficulties and work in this direction, Sino US relations should usher in a bright future.