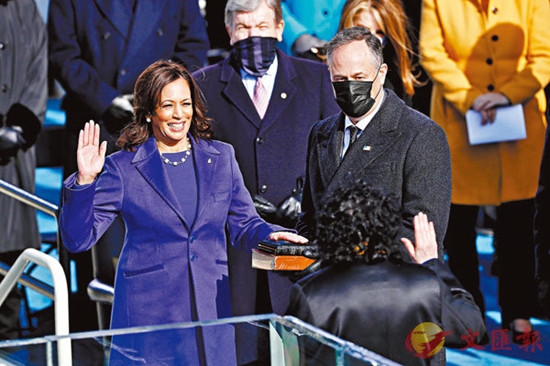 Harris was sworn in as vice president of the United States. Pembo

The new president of the United States, Biden, has formally assumed office in the unprecedented national crisis. He should not only deal with COVID-19 and related economic and livelihood issues as soon as possible, but also try to deal with the political and social tear caused by Trump. Although Biden has worked out a set of policy plans for his first 100 days in office, under the current situation of the Senate and the house of Representatives, whether the new deal can be supported by Congress is still a big variable. In addition, the pro trump forces inside and outside Congress are still haunted. Biden will face great challenges in the next four years, not to mention “Turning Crisis into opportunity”, just to prevent the crisis from worsening.

Many commentators in the United States believe that the crisis Biden faced when he took office is better than Lincoln, who set off the civil war when he took office, and Roosevelt, who took the oath under the depression valley. Presidential historian bechelos said that American democracy has just experienced a “near death experience” and I think all those who watch the new president take the oath will understand how fragile American democracy is and how much it needs to be protected. ”

Although both Lincoln and Roosevelt succeeded in “Turning Crisis into opportunity” during their term of office, taking advantage of the opportunities brought about by the crisis to promote reform and thus lead the United States to overcome challenges, they actually have advantages that Biden does not have. For example, during Roosevelt’s administration, the Democratic Party always held a majority of seats in the national assembly, which is enough for him to promote any large-scale reform; The Republican Party in Lincoln’s time had overwhelming power in Congress because of the withdrawal of the southern states.

The problem of government expenditure bonds is likely to reappear

On the contrary, at present, the Democratic Party has only the key vote of vice president Harris in the Senate and only a small majority in the house of Representatives. As the Republican Party is trapped in the post trump era infighting, it is almost impossible for Biden to win their support. In addition, even the Democratic Party is not monolithic. Many progressives expect to carry out more radical liberal policies. Biden’s middle line may not be as they wish. The conflict between the two factions may run through Biden’s entire presidency.

Biden also understands that it is not easy to pass Congress. Therefore, compared with the early days of former President Barack Obama, Biden is more inclined to achieve administrative goals through executive orders in the first 100 days, including overthrowing Trump’s most controversial policies and coping with the new crown crisis. However, his US $1.9 trillion (about HK $14.7 trillion) epidemic relief plan is still inevitable to win the support of Congress. Some Republicans have indicated that the plan’s spending is too high, which means that government spending and treasury bonds, which were often ignored by Republicans in the trump era, will become the focus in the Biden era.

Unite the country to fight against the extreme right

Although trump steps down, his supporters and the forces attached to him in Congress still remain, which will certainly limit the willingness of Republican moderates to cooperate with Biden. After the uprising in Congress, trump supporters have become a major threat to the national security of the United States. It will be very difficult for Biden to strike a balance between these far right and conspiracy forces and to unite the country.