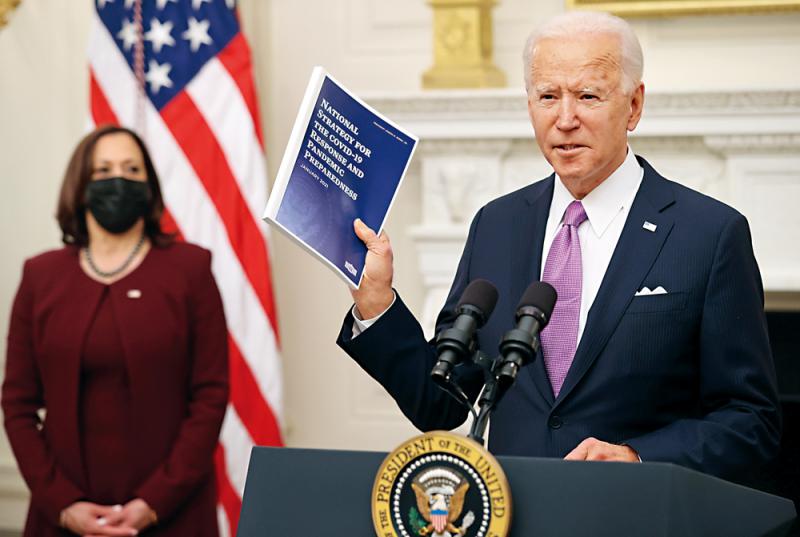 Photo: US President Biden unveiled the national strategy to deal with COVID-19 at the White House 21. /Reuters

[Ta Kung Pao] the BBC, the Wall Street Journal and the New York Times reported that the epidemic situation in the United States was still severe one year after the official announcement of the first confirmed case of the new crown. As of January 22, the number of confirmed cases in the new crown in the United States was 24.63 million, and the death toll was more than 410000, which was more than the total death toll of the US military during the Second World War. US President Biden announced a national strategy to deal with COVID-19 at the White House 21, set 7 goals, and signed 10 executive orders, announcing that the United States will take &ldquo, wartime &rdquo, and deal with the epidemic. At the same time, he promised that he would work to rebuild public trust and that scientists would not be subject to political intervention, aiming to correct the anti science misdirection of the trump administration.

Biden said: “our national plan is to start comprehensive wartime work and solve the shortage of supply to increase the production of protective equipment, syringes, needles and so on. When I say the state of war, some people question me;. As I said on the evening of the 20th, 400000 Americans died, more than the total number of deaths in World War II. ”

Biden stressed that the next will enter the most difficult and fatal stage, or it will take several months to get through. The Centers for Disease Control and Prevention (CDC) estimates that more than 4000 people may die in the United States every day in the first three weeks or so of Biden’s appointment, and the death toll will exceed 500000 by mid February.

Fudge: we can say it based on Science

According to the 10 executive orders signed by Biden, the spread of the epidemic was curbed by promoting vaccination, forcing the wearing of masks, expanding virus detection and treatment, etc. The authorities will use the authority granted by the national defense production law to increase the production and supply of new vaccines, virus detection equipment and personal protective equipment. At the same time, the authorities will also set up an infectious disease detection committee to improve the ability of virus detection, force cross state travelers to wear masks, and require international travelers to be isolated when they arrive in the United States, which is much stricter than the trump administration.

Biden also announced that the Federation will set up 100 community vaccination centers next month to reach the goal of 100 million doses of vaccine for the public within 100 days as soon as possible. At the same time, he criticized that the previous government did not pay enough attention to the epidemic response, that the current vaccine distribution plan is a “complete failure” and that vaccination work needs to start from scratch.

In addition, fudge, director of the National Institute of allergy and infectious diseases, attended Biden administration’s first White House briefing on the 21st as the White House’s chief anti epidemic adviser. Fudge said that the new government is committed to “complete transparency, openness and honesty”. Now he can finally talk about the ideas, evidence and science he knows and let science speak with a sense of liberation. &”Fudge also mentioned trump. He said he was not happy to disagree with trump on the epidemic, but the latter’s statement about hydroxychloroquine and other similar drugs was disturbing because it was not based on scientific facts.

As of the 22nd, only 16.5 million people in the United States have been vaccinated, including California, Ohio, West Virginia, Florida and Hawaii. In the past few days, warnings of “vaccine depletion” have been issued. According to the state government and local officials, in fact, the supply of the new vaccine was in short supply about a week ago, greatly limiting the ability of the States to carry out the vaccine. Due to the shortage of vaccines, many people in New York City have been postponed or even cancelled the vaccination time, and the authorities said that vaccination appointment service is no longer available at present.

According to the evaluation of American media, Biden’s new executive order is more inclined to concentrate the power of the federal government to deal with the epidemic than states’ self-reliance, which has generally changed the anti epidemic route in the trump era, but its real implementation depends on whether Congress grants funds. Robert Blendon, Professor of health policy and political analysis at Harvard University, pointed out that coping with the epidemic and promoting economic recovery are the key to measure the success of Biden’s administration in the next two years, as well as the mid-term elections in 2022. Other experts believe Biden’s vaccine plan is not ambitious enough, and the goal of 100 million doses per 100 days is too low.