Recently, a 69 year old woman from Guangzhou was admitted to the Department of gynaecology of Guangzhou first people’s hospital. She had a bulging abdomen, just like a full-term pregnant woman. When aunt went to see a doctor, she also jumped. What’s wrong with her? Aunt said that she could feel a lump in her abdomen five years ago, but she didn’t want to trouble her family to take her to see a doctor, so she didn’t pay attention to it. In recent months, the parcel has increased rapidly, until it is big enough to climb a floor, it will be out of breath, so I rushed to the hospital.

Open the abdomen and extract more than 30 liters of “ink”

On the third day after admission, she went into the operating room. With the close cooperation of the anesthesiologist, the doctor carefully opened her peritoneum, and a huge cystic pelvic mass appeared in front of her eyes. 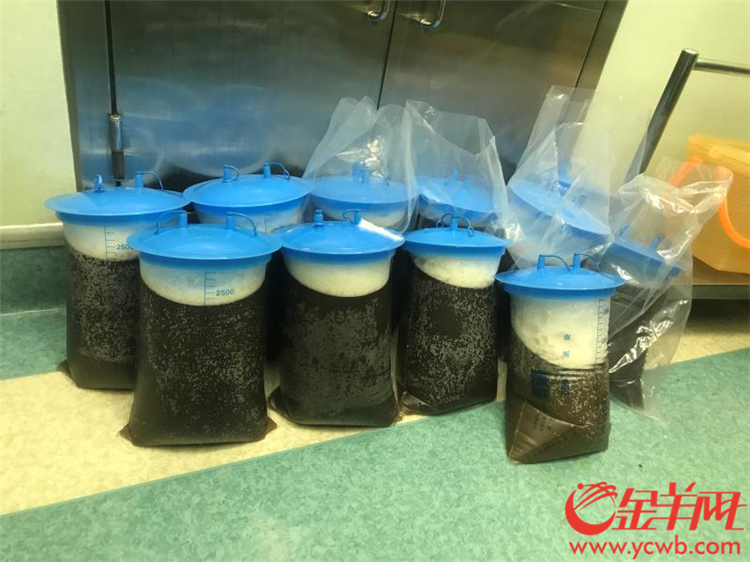 Photo: take more than 30 liters of “ink” from aunt’s stomach,

“There may be a lot of ascites inside, and the elderly have basic diseases such as hypertension, so we must stabilize the circulation.” director Gu Zhengtian once again stressed the risk of operation to the doctors in the operating room, and then gently punctured the oocyst puncture needle into the sac, and the dark green liquid slowly flowed out. “There are 3000 ml” the nurse reminded, so director Gu Zhengtian asked the doctor to suspend his work, “let’s stop and let aunt adapt.”. So, for every 3000ml of ascites, let aunt rest for about 5 minutes, and then continue for 11 times, a total of 33000ml of ascites, that is more than 30 liters!

Patients with benign ovarian tumors may have no symptoms,

Such a large amount of ascites is quite rare in gynecology. Fortunately, the frozen report of the elderly showed “mucinous cystadenoma with fibroma”. That is to say, aunt got ovarian benign tumor.

Gu director, mucinous cystadenoma, accounting for 20% of benign ovarian tumors. The malignant transformation rate was 5 ~ 10%. It is difficult to make a definite diagnosis before operation.

Experts said that due to the slow onset of ovarian mucinous cystadenoma, patients may have no conscious symptoms, even after rupture, there is no obvious peritoneal irritation symptoms, a few may have abdominal pain, distending pain and discomfort. Therefore, when aunt has a mass in her abdomen, she has no obvious symptoms and occasionally has gastrointestinal discomfort. With the progress of the disease, aunt will slowly feel the feeling of abdominal distension and discomfort. However, it is found that some women think that this is just common gynecological inflammation, so they ignore it. When they finally have to seek medical treatment, the disease has been delayed.

Due to the possibility of malignant transformation, the doctor gave her a total hysterectomy plus double appendectomy. The operation took more than two hours, during which 100ml of albumin was infused into her. Her vital signs were very stable, and the operation process was very smooth.

On the first day of the operation, the doctor pulled out the catheter for aunt, and she was able to move out of bed smoothly. After removing the pelvic mass, my aunt seemed to be a little uncomfortable, but she was very happy. She said, “I knew the operation was so easy, and it was so easy after the operation, I should have come long ago.”.