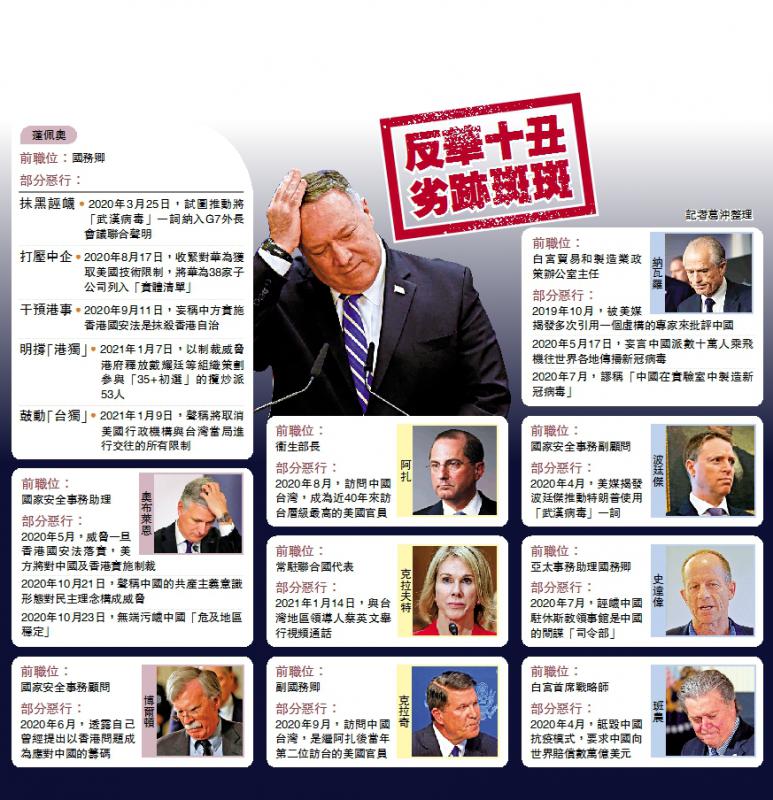 In the early morning of the 21st, a spokesman for China’s foreign ministry announced that China has decided to impose sanctions on 28 US personnel, including pompeio, who have seriously violated China’s sovereignty and are mainly responsible for China related issues. They and their affiliated enterprises and institutions have also been restricted from dealing with and doing business with China. Chinese Foreign Ministry spokesman Hua Chunying pointed out at a regular press conference on the 21st that in the past few years, some anti China politicians in the United States have planned and promoted a series of crazy acts, seriously interfering in China’s internal affairs, harming China’s interests and hurting the feelings of the Chinese people. These anti China politicians are bound to pay for their crazy acts.

Among the 28 US personnel that China has decided to implement sanctions are Pompey o, Navarro, O’Brien, stavey, portinger, aza, kratch, kraft, Bolton and Bannon in the trump administration. These people and their families have been banned from entering the mainland of China, Hong Kong and Macao. They and their affiliated enterprises and institutions have also been restricted from dealing with and doing business with China.

Hua Chunying pointed out on the 21st that China’s decision to impose sanctions on the relevant personnel of the US side is a response to the wrong behavior of these people in seriously infringing China’s sovereignty, security and development interests on China related issues. It is completely legitimate and necessary, and shows the firm determination of the Chinese government to defend its national interests. In the past few years, some anti China politicians in the United States, out of their own political self-interest, prejudice and hatred towards China, have planned and promoted a series of crazy acts, seriously interfered in China’s internal affairs, harmed China’s interests, hurt the feelings of the Chinese people, and seriously damaged Sino US relations. She stressed that China has repeatedly pointed out that these anti China politicians are bound to pay for their crazy acts. Hua Chunying said that we hope the new US administration will treat China and Sino US relations objectively and rationally. She said: “I believe that with the joint efforts of both sides, the good angels in Sino US relations can overcome the evil forces. ”

Pompeio has repeatedly been a judge of Hong Kong affairs

The ten people named by the Chinese Ministry of foreign affairs to implement the sanctions have done a lot of bad deeds in China. During his term of office, former US Secretary of state Pompey o, who ranked first, repeatedly held a strong ideological bias and cold war thinking, violated the basic norms of international relations, made strange remarks, maliciously attacked China’s political system and spread the “China Threat Theory”; He also launched a series of decisions and policies that seriously interfered in China’s internal affairs, harmed China’s interests, and damaged Sino US relations. He repeatedly pointed fingers at China on issues such as Hong Kong, Taiwan, and Xinjiang, and even tried to interfere in China’s National People’s Congress’s decision to establish and improve the legal system and enforcement mechanism for safeguarding national security in the Hong Kong Special Administrative Region, which was firmly opposed by China.

Second, Navarro served as chairman of the White House Trade Committee and director of the White House Office of trade and manufacturing policy in the trump administration. He has made many speeches on Sino US economic and trade issues and China’s anti epidemic policy. Covid-19, Navarro was not only &ldquo, but also a &rdquo, and he made up for the poor economic theory by making up his expert remarks, advocating unreasonable pressure on economic and trade negotiations. During the new crown epidemic situation last year, he repeatedly slandered China’s epidemic prevention and propaganda against scientific speech. A spokesman for the Chinese Foreign Ministry has repeatedly refuted Navarro, saying that he was addicted to lying and rumor making and had no integrity. O’Brien, the former US president’s assistant for national security affairs, ranked third. He has repeatedly ignored reality to discredit and attack China. In October last year, O’Brien falsely claimed that China “posed a threat to democratic ideas”. As a result, a spokesman of the Chinese foreign ministry directly criticized his remarks, which were full of strong ideological prejudice and cold war thinking. It was a resurgence of McCarthyism, contrary to the historical trend, unpopular and doomed to failure.