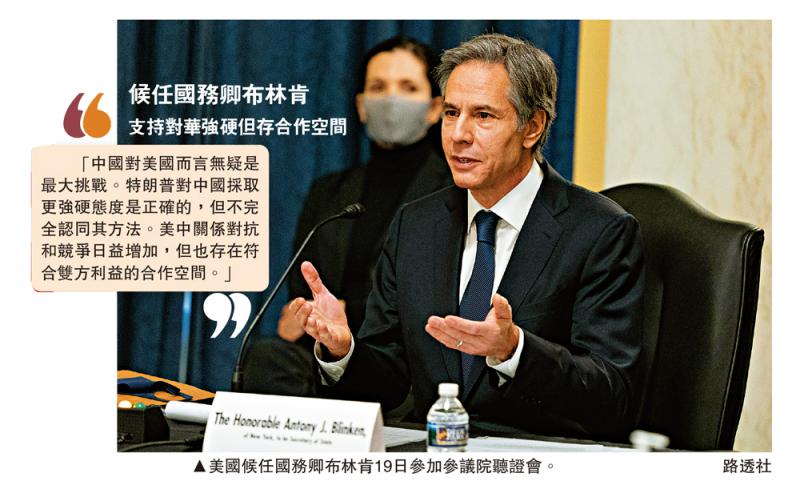 New US President Biden’s cabinet nomination hearing kicked off in the Senate on the 19th, with Secretary of state designate Lincoln, Treasury Secretary Yellen, defense secretary Austin, Homeland Security Secretary mayokas and national intelligence director Haynes attending. On the issue of China, they unanimously made a tough stand. Brinkin said that he regarded China as the biggest challenge for the United States in the future. Foreign Ministry spokesman Hua Chunying said on the 20th that China’s policy toward the United States is consistent and clear. It is hoped that the new US administration will work with China to push China US relations back to the right track of development as soon as possible.

The U.S. Senate resumed its first meeting on the 19th after many days of recess. The five committees held hearings on the five cabinet members nominated by Biden. VOA, Bloomberg and other media believe that Biden’s cabinet may continue Trump’s tough policy toward China.

However, some experts believe that this is just a high-profile statement made by cabinet candidates to quickly pass the certification and cater to the consensus of the two parties in Congress on China.

Biden’s nominated Secretary of state, Abraham Lincoln, said at a confirmation hearing in the Senate on the 19th that it was right for the trump administration to take a tougher stance on China. At the same time, he also agreed with the position of former Secretary of state pompeio on many China issues. However, unlike the trump administration, he will focus more on working with other democracies to jointly put pressure on Beijing. However, he also said that there are overlapping interests and room for cooperation in Sino US relations, such as climate change.

On Hong Kong related issues, brinkin claimed that Hong Kong’s national security law “undermines Hong Kong’s true freedom and autonomy.”;. He also pointed out that the new government will next consider how to provide “substantial help” to some Hong Kong people, including providing shelter for thugs.

Defense Secretary candidate Austin said at the nomination hearing on the same day that he and the new government will regard China as the world’s largest competitor, and from the perspective of defense, China also poses a continuous threat to the United States in most regions. He said: “China is on the rise, and although Russia is also a threat, it is on the decline.”;.

On the same day, John Yellen, a candidate for finance minister, said at the nomination hearing that China has long used a series of policies to “weaken American companies”, including illegal subsidies, product dumping and other trade barriers. China is the most important strategic competitor of the United States, and the Biden administration will use all available tools to combat China’s unfair trade practices.

In addition, Haynes, Biden’s nominated director of national intelligence, said on the same day that the United States should take a “strong position” against the threat posed by a more aggressive and confident China, and she will give priority to investing more resources in dealing with China.

Russia: Biden and his team

Chinese Foreign Ministry spokesman Hua Chunying said on the 20th that China has always believed that a good Sino US relationship conforms to the fundamental interests of the two peoples and is also the common expectation of the international community. Although there are differences between China and the United States, they share broad common interests and cooperation space, and bear special responsibilities for world peace and development.

China’s policy toward the US is consistent and clear. &”Hua Chunying said that we are committed to achieving no conflict, no confrontation, mutual respect and win-win cooperation with the United States, while firmly safeguarding the interests of national sovereignty, security and development. It is hoped that the new US government will work with China to strengthen dialogue, control differences, expand cooperation, and push China US relations back to the right track of development as soon as possible, so as to better benefit the two countries and the people of the world.

At the same day’s nomination hearing, most of the candidates were supported by both parties. US media expect the Senate to vote on the nomination as soon as 20 local time, that is, the day Biden was sworn in. Russian Kremlin spokesman Peskov said, “Russia will continue the way it has done for thousands of years: to establish good relations with the United States.”. &”As for whether Washington will work toward a common goal, Peskov said, it’s up to Biden and the team.