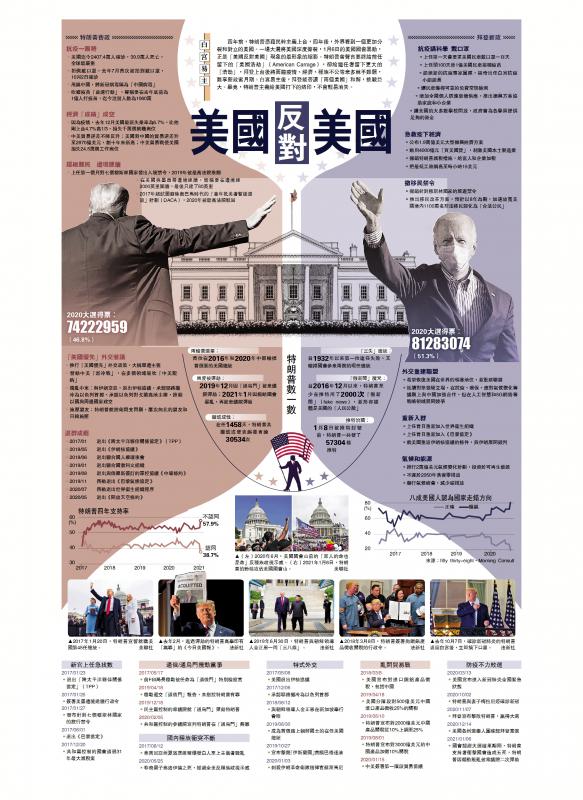 Four years ago, Trump came to power with populism. Four years later, the outside world saw a more divided and antagonistic United States. A general election has deeply torn the United States. The riots in the United States Congress on January 6 are the most vivid miniature of the phenomenon of “the United States against the United States”. Trump once vowed to end the “American catastrophe” left by his predecessor, but left a greater “catastrophe” for his successor. Biden will face many thorny problems such as epidemic situation, economic and racial injustice after he takes office, and will not enjoy the honeymoon period of the new deal. After the change of the White House, whether Biden can reconcile the two Americans is a great challenge. After all, the brand of trumpism on the United States will not disappear easily.

The fight against the epidemic is a mess

So far, 24.074 million people in the United States have been diagnosed and 399 000 people have died, the most serious in the world

He refused to wear a mask. He was photographed wearing a mask for the first time in July last year and was diagnosed on October 2

The new coronavirus is called “China virus” in China;

Because of the epidemic, the latest unemployment rate in the United States was 6.7% in December last year, one third higher than 4.7% when he just took office, and he lost tens of millions of jobs

Drive out refugees and build a wall at the border

In his first month in office, he issued an entry ban on seven Muslim countries, which was overturned by the Supreme Court in 2019

In 2017, it tried to abolish the “suspension of repatriation of children arriving in the United States” plan (DACA) in the Obama era, which was rejected by the Supreme Court in 2020

Promote the foreign policy of “us first” and engage in unilateralism

Disrupting the Middle East: making bad relations with Iran, withdrawing from the Iran nuclear agreement, recognizing Jerusalem as the capital of Israel, recognizing Israel’s sovereignty over the Golan Heights, and promoting the establishment of diplomatic relations between Israel and its neighboring countries

Withdrawal from the trans Pacific Partnership Agreement (TPP) in January 2017

Withdraw from Iran nuclear agreement in May 2018

Start withdrawing from the Paris climate agreement on November 2019

On the first day in office, Americans will be required to wear masks for 100 days

Vaccinate 100 million Americans in their first 100 days in office

Let most schools in the United States open, and the government will provide sufficient funds for each school district

Economy under the first aid epidemic

The US $1.9 trillion economic revitalization plan was announced

Raise the minimum wage to $15 an hour

The immigration reform program, which is expected to speed up the liberalization of the naturalization of 11 million illegal immigrants in the United States as & lt; legal citizens & gt;

Continue to take a strong stand against China, strengthen cooperation with China on anti epidemic, environmental protection, climate change and other issues, but compete in artificial intelligence, 5g network and other strategic areas

Rejoining who on his first day in office

Rejoining the Paris Agreement on the first day of office

Negotiate with Iran on the terms of U.S. return to Iran’s nuclear agreement

Exit from the TPP

Withdrawal from the Paris Agreement

The Democratic controlled house of Representatives impeached trump on “tongwumen”

Ethnic conflicts continue in the country

The death of Freud, an African American man, set off a nationwide anti racial discrimination demonstration

Recognize Jerusalem as the capital of Israel

Announced the killing of the head of the Islamic state

Start a trade war in disorder

The United States announced a tax on imports of steel and aluminum products, including China

Trump announced a 10% tariff on $300 billion of Chinese products

Trump and his wife Melania are diagnosed with a new crown

Biden announced his victory over trump

During the period when Congress certified the election results, trump supporters stormed Congress, causing five deaths, and trump was impeached twice by the house of representatives for sedition