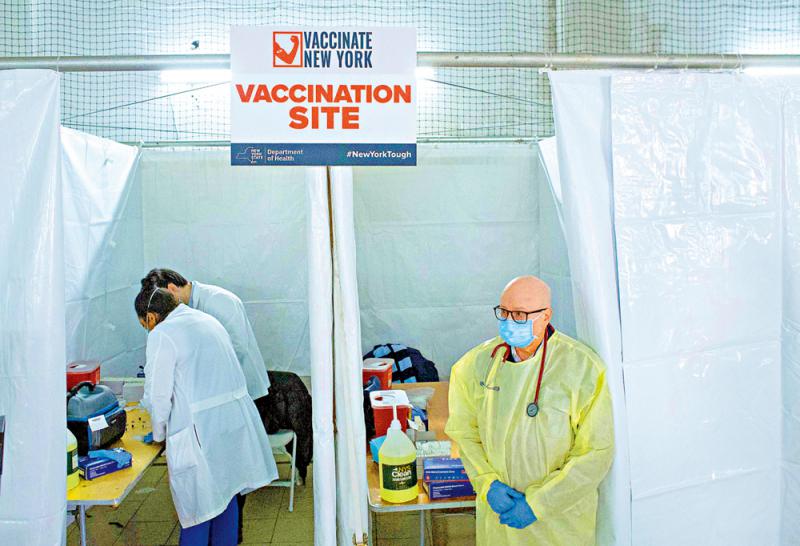 Photo: doctors and nurses wait for people to come to a vaccination site in New York on the 15th. /Agence France Presse

Covid-19, according to the Congressional Hill newspaper, the new US crown disease continues to deteriorate, and the authorities are eager to curb the epidemic by speeding up vaccination. However, due to the spread of false information about the vaccine, a large number of health care workers and nursing home workers who are listed as the priority group refused to be vaccinated, which caused the concern of experts. Nearly 30% of doctors and nurses in some parts of New York State refuse to be vaccinated, and many hospitals are facing a shortage of staff due to the epidemic.

Recently, a new coronavirus strain with stronger infectivity has appeared in the United States. The center for Disease Control and Prevention (CDC) has warned that the new strain will bring the already stressed medical system to the brink of collapse, and it means that the threshold of population immunity will be raised, and more people need to be vaccinated. At this time of crisis, many state officials found that doctors and nurses who should have given priority to vaccination refused the government’s kindness. So far, more than 40% of health care workers in New York state have not been vaccinated, and the proportion of health care workers in different places has ranged from 12% to 29%.

Experts say doctors and nurses refuse vaccination for the same reason as ordinary Americans, mainly because of concerns about potential side effects. Affected by the false information exaggerating the security problems on the Internet, many people began to resist the vaccine.

New York governor Cuomo pointed out that many hospitals are facing the problem of no one available due to the infection of medical care. &That’s why we give priority to health care. Doctors and nurses will not be infected with the disease after vaccination, and the hospital can operate normally. All will benefit from the normal operation of the hospital. ”

A survey shows that nearly 30% of medical logistics practitioners in the United States are not willing to get vaccinated, even if the vaccine is free and scientists guarantee its safety. So far, more than half of the nursing workers have not been vaccinated, which poses a potential threat to the elderly with severe illness and high mortality.